Could the CraftBot 3 be a worthy entry to the dual extrusion market or does it lack the reliability to truly stand out? Check out our review to see how it holds up.

Hailing from Hungary, the 3D printer manufacturer CraftUnique has earned a first-rate reputation for manufacturing reliable and easy-to-use desktop 3D printers. In fact, their flagship CraftBot Plus was awarded by 3D Hubs as the Best Plug N’ Play 3D Printer in 2016, 2017, and 2018.

The company is now expanding its reach into the realm of dual extrusion. Cue the CraftBot 3 – also known as The Supervisor – a dual extrusion 3D printer that has a filament monitoring system, high-grade components, and oh so much more.

Listed at $2199, the CraftBot 3 offers some distinct features usually reserved for 3D printers at a higher price range. Do the flashy features live up to the hype? Does this machine offer an alternative to its higher-priced peers?  Here’s our review of the CraftBot 3’s performance and whether it’s worth your money.

We really wanted to like this printer. The CraftBot 3 offers many useful features that would serve any professional well, there’s a whole slew of exciting specs that – especially at this price point – make it an attractive choice.

Features like dual extrusion are exciting to use and work with – and the printer lets you customize the settings for each extruder so you can work with two different filament types simultaneously.

But the reality is that these features mean nothing if they don’t work, or only sometimes work or just don’t work well enough. The CraftBot 3’s print quality is simply not good enough to make it anyone’s first choice.

Don’t get us wrong — this printer offers cool perks like an LED indicator that changes colors to indicate printing status and others. But when it really comes down to whether it can perform against other dual extrusion printers, or just perform at all, it’s simply not in the same league as a pricier, but more reliable BCN3D Sigma R19, for example.

Similarly to the BCN3D Sigma 3D printer range, the CraftBot 3 utilizes an Independent Dual Extrusion (IDEX) system, which entails two print heads that operate independently from one another. This allows users to print two objects at once or add PVA support material to produce more complex parts. The CraftBot 3 automatically cleans the nozzles when the print heads swap places by building a hollow filament tower to ensure excess filament material doesn’t muddy up the surface of your print.

Aside from the dual extrusion system, the CraftBot 3 also contains a number of other impressive features. One highlight is the new filament monitoring system (FMS) that keeps track of filament consumption, provides troubleshooting when a filament jam is detected, and also sends messages to the user via the CraftApp app when manual intervention is required.

The CraftBot 3 has a sizable build volume of 374 x 250 x 250mm (270 x 250X 250mm for dual extrusion and 187 x 250 x 250mm for multi-part printing) and is capable of printing at a layer resolution of 50 microns when using the 0.25mm nozzle. And, if you’re concerned about this printer keeping you awake throughout the night, rest assured that the CraftBot 3 motor control makes this 3D printer quite quiet during operation.

In terms of the touchscreen, which is large and colourful, once you figure out what all the icons mean it is very easy to use.

Priced in the $2,000 range, the CraftBot 3 still manages to boast a professional-grade design. It has a full-metal hotend that can reach temperatures as high as 300°C, expanding the range of compatible materials far beyond your average PLA. It’s also equipped with high-accuracy ball screws that are supposed to improve overall print quality and performance.

The CraftUnique team has put a fair amount of thought into the heated bed. Not only is it designed to prevent warping and sticking, but it can also be quickly removed once your print is complete.

However, the bed has the dual annoyance of being hard for prints to stick to — which requires copious amounts of glue to fix — and then being extremely difficult to pop prints off of once they are done.

The material coating the top of the bed is also easy to accidentally scrape off when dealing with a particularly firmly attached print, leaving gashes on your otherwise flat surface.

We started our CraftBot 3 adventure off with a classic print: The Benchy. It turns out printing in doubles is twice as fun. The prints were fairly decent, but where the machine struggled was with overhangs and bridging. This issue would become more apparent the more we printed.

It was fun finding models for dual extrusion prints to test this printer. What was less fun was first figuring out how to get our prints to stick to the hotbed.

After a few prints came unstuck midway through printing and failed, we realized the solution is a lot of glue. Though our first successful print, Left Shark, was fairly decent, its success was tough to replicate. In fact, this printer’s performance was consistently inconsistent.

One of the main issues we had was with leveling the bed properly for prints. At its price range, automatic bed leveling would be preferred, however, with this machine, the pressure is on you to get it exactly right — a feat complicated by the dual extruders.

Wanting to test its extrusion abilities, we printed two Eiffel Towers simultaneously – one in gold and one in silver. Though it did print two towers – in the end – the result was a hot mess of stray strands of filament everywhere. It turns out its retraction abilities leave a lot to be desired.

When using both extruders, and not at the same time, the printer builds a hollow filament tower to get rid of any filament blobs that accumulate on the end of the nozzle while it’s idling. This works, for the most part, but has many downfalls. Not only does it waste a bit of filament, but when doing a large build, the tower can get quite tall and unstable. Midway through the print, the tower snapped in half – jeopardizing 20 hours of work with a remaining 20-30 left to go.

We ended up taping a metal rod to it to try and keep it upright and together so the entire print wouldn’t fail or become more sloppy than it already was. And it worked, but if we hadn’t been watching the printer in action right when this happened, we wouldn’t have been so lucky.

As mentioned earlier, a big issue with the printer was its ability to handle overhang and bridging. On a cheaper machine, this would be more understandable, but for a printer marketed as for professionals, it was disappointing. Though it got through prints, there was nothing it made that wowed us.

Our final print, the Autodesk Kickstarter test, looks at an FDM printer’s precision – read more about it here. The CraftBot 3 achieved the following results:

Ultimately, because the prints were generally mediocre, we did not bother testing the printer out with other materials.

CraftWare, CraftUnique’s free slicer software that it boasts is “compatible not only with CraftBot, but every RepRap 3D printer operating with Gcode”, does not live up to its marketing hype.

In fact, we’d suggest the name CrashWare instead.

Though it offers many handy features and really lets you customize your print within the expert mode, it is not as easy-to-use as claimed and feels a little clunky and frustrating.

One of the features we liked was how when slicing the model, it gives you a lot of freedom to really customize the print. It also gives a visual so you can see exactly what the settings you pick will look like and it explains what each function does and how it affects the quality of the print.

But, we ran into a lot of issues with CraftWare. After troubleshooting with CraftUnique, we were told the reason some of our prints were crashing was because the default setting for ‘Island Hopping’ is set to ‘Balanced’. This causes a crash on certain models, like the Kickstarter Autodesk test, for example.

The solution is to switch it to ‘Shortest’ or ‘Straight’ in the expert slicer mode on the ‘Advanced’ tab, but CraftUnique says the bug should also be fixed in the next two months when they release an update to CraftWare. 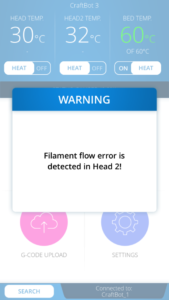 The CraftApp, though, is fairly decent. It shows you how the prints are going in your queue and also lets you know if anything goes awry.

In fact, at one point it posted a bold ‘WARNING’ and stated a ‘filament flow error is detected in Head 2!’ It was right. And when I went to check on the printer it was valiantly trying to unclog itself. Bless. A neat feature that actually seems to work, though it is suspect how often the extruders clog.

This printer offers a lot of features that would be very useful in a professional setting — if the print quality was more consistent.

Its lower price relative to other dual extrusion printers using IDEX technology, like the BCN3D Sigma printers, is a definite draw, but this machine comes with a lot of hassle and time spent sweet talking it and troubleshooting. If a pricier (and better performing) machine is absolutely out of the question for you, but you think you have the time and patience to fiddle around and need prosumer features and workflows, then the CraftBot 3 could be a good option.

But be aware — this is a finicky beast.

Here are the cold, hard technical specifications for the CraftBot 3 3D printer:

License: The text of "CraftBot 3 Review: The Supervisor Needs Supervision" by All3DP is licensed under a Creative Commons Attribution 4.0 International License.

Stay informed with notifications from All3DP.

You get a notification when a new article is published.

You can’t subscribe to updates from All3DP. Learn more…